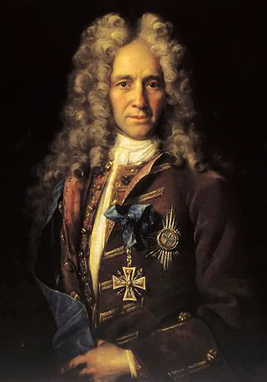 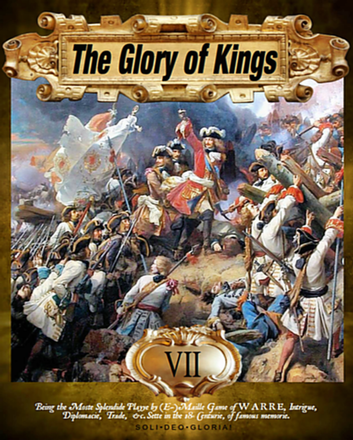 The sun arose on a green but windswept ridge overlooking a verdant valley dotted by trees and dusty tracks. All was peaceful, save for birdsong. The keen-eyed amongst us would have seen white-coated troops snaking across a bridge in column, while outriders spread out before them, keeping a watch out for observers.

The Marquis, standing on the ridge, snapped shut his eyeglass and turned to the Duke of Anjou. “Your grace, the Austrians are forcing the frontier in some strength.”

Anjou smiled grimly. “Then we shall give them a hot reception. Order the army to deploy, if you would be so kind.”

Drums began to rattle and roll, and men hurried to form line while cannon were brought forward.

Ominously, the bird song had ceased…

The Glory of Kings is set in the days of the 18th century, with one game turn representing a month and players taking on a variety of roles. Typically you play as the head of a country, for example the King of France, a German prince, or a Chinese or Indian lord. Smaller positions, such as a notorious pirate, can be taken on instead, if you prefer.

Each game turn is run approximately once a month in real life, and each turn you receive details of your own position details, hopefully letters from others, and the in-game newspaper. The game has won multiple awards over the years, and is a firm favourite amongst our players.

Turns cost £10 each, or £6 each if you prefer to roleplay as a single character in the sister-game Swashbuckler (such characters still play within games of The Glory of Kings).

HOW TO TAKE PART!

All you need is either access to an email account, and a computer or suchlike in order to send and receive orders. Files are sent to you as PDFs, so anyone can open them, and your turns are sent in to us as word files (doc, docx,or rtf, for example; in fact we can cope with most text files). If you prefer, and live in the U.K., playing via the post is possible instead (a £2 surcharge applies though).

The first requirement to take part is to get the rules. There are many other extra books you can purchase, but the only one you need for certain are the rules.

Nothing else needs to be done at this stage. With the rules you’ll receive a list of positions currently available, and instructions on what to do next.

The rules are deliberately cheap in order to get potential players to take a look. Please note that you are not tied into anything, and you can join or leave a game of The Glory of Kings any time you like!

Thanks for reading, and we hope you decide to take the plunge and join us in this epic game!