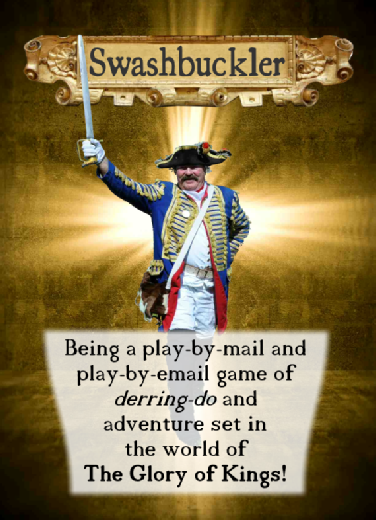 The Glory of Kings is very involved and can be an expensive game in which to participate, both in terms of time and money. For God, King & Country was introduced many years ago as a roleplaying variant to allow players to take part as a single character rather than trying to run an entire nation or pirate brotherhood. It ran for a few years reasonably successfully but was then brought to an end. This brand new game, Swashbuckler, has the same basic premise. What then is that premise, I hear you cry?

This gives the games a unique layer. For example, if you want a commission as an officer in a royal regiment, you will have to write a letter to the king to stand a chance of getting such a lofty appointment. And the king will be another player with different objectives since he is playing in The Glory of Kings in the same world!

Also you'll get caught up in the actions of The Glory of Kings players. For example, if one is committing piracy a ship you are sailing on may be captured, or what if you are staying in a town that comes under siege? The great thing is lots of different people in real life are impacting what happens to your character, the situations he or she finds himself in; it isn't all just down to the whim of the referee!

Swashbuckler game turns cost £6 each, with one turn run per month. However you can purchase the rules without being under any obligation to take part.